My Turn: ‘Improved’ Lake Tahoe clarity? Not so fast | SierraSun.com
YOUR AD HERE »

My Turn: ‘Improved’ Lake Tahoe clarity? Not so fast

LAKE TAHOE — Have you heard? Lake Tahoe clarity is getting better now.

Recent press releases claim a second year of improved Lake clarity, “the best in 10 years,” no doubt misleading the casual observer to infer that Lake Tahoe’s water quality problems are behind us.

Have you seen the near shore, shallow water lately? More to the point, do you remember what it was like 25 years ago? Many of us do, which raises the questions of what was omitted from the press releases and why create the a false impression?

In the Tahoe Environmental Research Center’s annual State of the Lake Report for 2012, “A factor different to last year was the depth of mixing. This year the entire 1645-foot depth of the Lake mixed.” To data analysts this periodic mixing of clear, deep water dilutes contaminants and shows improved Secchi measurements often for a couple of years. Why was this fact omitted from the improved clarity claim?

Drought and numerous other factors influence clarity. But even with the upwelling of deep water and improved winter clarity, TERC’s State of the Lake Report continues, “there is the continued decline in summer time clarity. In 2011, summer clarity was the second worst value on record.” The fact that summer clarity continues to decline during years of deep water mixing has caused some consternation among TERC scientists.

In the comprehensive Lake Tahoe Watershed Assessment, “An important lesson contained in the Secchi depth data is that by using a short-term subset of even five to six years, it is easily possible to arrive at a totally incorrect interpretation of the data (Goldman 1993).” So why was a press release made which prematurely interprets incomplete information?

The Tahoe Environmental Research Center leads the way for data gathering and monitoring of numerous variables effecting Lake clarity. This scientific organization performs so noble a purpose that it deserves independent funding. Today, TERC’s funding is channeled through the Tahoe Regional Planning Agency, which is embroiled in political and legal controversy, and is hardly an unbiased funding source.

Lake clarity is directly affected by sediment flowing into the lake. To substantiate any claim of long-term clarity improvement, there must be factual evidence that Lake inflows from storm water pipes and specific projects are measurably reducing the fine sediments and nutrients that cause water quality degradation. That evidence is lacking.

The Best Management Practices (BMPs) that are intended to infiltrate runoff (i.e. seep into the ground) from every parcel have only been installed on a small percentage of properties, and many of those are not maintained. The vaults which are intended to filter storm water from roadways (before it discharges directly into the lake) lack evidence that the filters actually remove the super fines that compose 75 percent of the fine sediment contamination.

Models of what these measures are supposed to do is no substitute for actual field measurements. And sadly, the models and their modeled results often direct spending on ineffective but politically expedient activities to reduce contaminants.

Lake Tahoe water quality is in peril. Only to the extent that the science is divorced from politics can there be an accurate representation of reality. This is a call for independent funding of TERC’s monitoring activities, real-time provisional release of water quality data, and an end to misleading press releases aimed at influencing public opinion.

David McClure is a Reno resident and president of the North Tahoe Citizen Action Alliance. 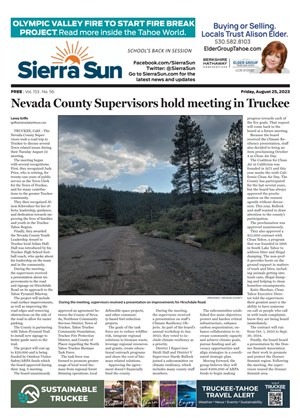