Mountain Times: A guide down a memorable trail | SierraSun.com
YOUR AD HERE »

Mountain Times: A guide down a memorable trail

Thank you to former winter Olympians Tamara McKinney, Kristen Clark, and Johnny Mosley for guiding Alan, me, and 50 or so other skiers down the 1960 men’s downhill course last week. It was very interesting to see the actual route.

Alan and I saw the men’s and women’s downhill courses at Snow Basin, Utah tjree years ago that were used for the 1992 winter Olympics in Salt Lake City. The differences are glaring. The Snow Basin courses had many more steep parts than the Squaw Valley course and were definitely more technical. However, like any other race, the courses are equal for all contestants and they must adapt to the conditions that lay ahead of them.

Due to the relative flatness of the course, a couple of innovations to the sport proved to be the keys to victory for the successful competitors. Per Tamara, the racers that finished first and third wore metal skis … the first in Olympic competition. Per Kristen, the introduction of the tuck or and#8220;eggand#8221; position made the racers more aerodynamic, thus allowing them to maintain speed in the long, less technical parts of the course. This position continues to be used today, and will continue to be part of downhill and super-G races in the future.

Wow … to think that the 1960 Olympics were held 50 years ago! For oldsters and and#8220;midstersand#8221; like me, the 1960 Winter Olympic Games were the first ever seen on television. This first and#8220;black and whiteand#8221; telecast of the Olympics on American TV was shown on CBS, which paid just $50,000 for the privilege. And it was Walter Cronkite who hosted the events! (Bet you thought it was ABC’s Wide World of Sports with Jim McKay … I did).

The seed was planted. For myself, and many other current and past Tahoe/Truckee residents, the 1960 Olympic Winter Games were directly responsible for us coming, then staying in this area. Prior to the Olympics I knew very little about the Tahoe area, and for a Bay Area boy, winter sports in the snow were not what my family or friends did.

In 1963 I went with a church youth group to Dodge Ridge (down by Sonora) to learn to ski. After my first day, I knew I was hooked. The next year I asked my Dad to drive me up to Tahoe to ski. To make a long story short, we stopped at the brand new and#8220;Boreal Ridge at Castle Peakand#8221; ski resort to ski. A couple of years later, I was a weekend ski instructor at Boreal; the next year I met my future wife, Alice, at Boreal where she worked in and#8220;Zorich’s Ski Shop.and#8221;

After four years in the Navy, Alice and I came back to Boreal in December of 1971 to work and#8220;one more seasonand#8221; prior to returning to the real world to get a real job. Guess what? We never went home!

Memories of Powder Bowl … When answering last week’s question, long time resident, Barbara Northrop shared the following: and#8220;In the and#8216;60s, during the ownership of Jerry and Evie Waters, Powder Bowl (along with and#8220;Paul Masson Wineryand#8221;) hosted annual barrel stave races. The competition was open to various age groups with adult winners being presented with a bottle of champagne, and the kids, a miniature barrel with a skier on top. The racers raced on real barrel staves with real bindings mounted on them. Everyone had a great time, and it was fun to watch.and#8221;

Participants included her daughter, Pat Northrop who raced and won the barrel, not the champagne! It would definitely be fun to see this event reintroduced at one of the areas. Takers?

Norm and Alan Nicholls of Nicholls of the Nicholls Real Estate Group are affiliated with Dickson Realty at 11500 Donner Pass Rd. in Truckee.

But many contestants have been around longer (and are wiser) than us and identified and#8220;Powder Bowland#8221; as the original ski area at that site. Therefore either was a correct answer.

This week’s question and#8230; and#8220;Verizon Wirelessand#8221; is the current tenant in the western most commercial space in the Safeway Center in Truckee. What was the name of the Italian restaurant that occupied that space for years? Call us at (530) 550-5035 or e-mail us at nnicholls@dicksonrealty.com with your answer or with past memories you may wish to share in a future column. 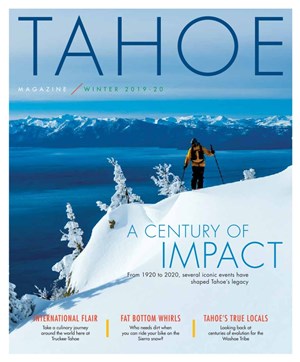